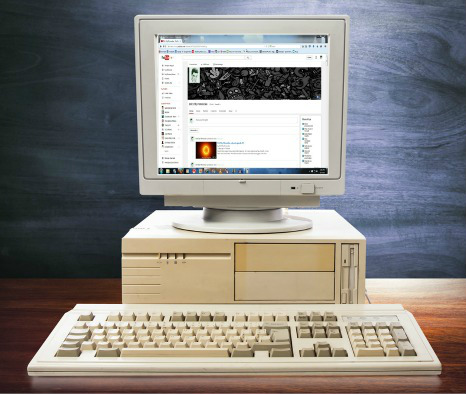 Luigi Russolo was a man ahead of his times. Russolo's essay L'Arte dei rumori (The Art of Noises) published in 1913, explores the origins and evolution of man made sounds. Russolo notes that while early music tried to create sweet and pure sounds, it progressively grew more and more complex. Luigi envisioned a world dominated by industry and he saw no reason why this industrial dissonance couldn't be forged into aesthetically pleasing music. It goes without saying that Signore Russolo never gave a listen to Contact High with the Godz, otherwise he may have had a change of heart.
Paul Hegarty, music writer for The Guardian poses the question: “So what do we seek if we are drawn to noise music? How and why would anyone want to be assaulted by it?” The overwhelming human desire to stave off boredom combined with our need to differentiate ourselves from the mob would be my best guess. Which leads us back to Russolo, who in the age of gramophones proclaimed “music has reached a point that no longer has the power to excite or inspire. Even when it is new, it still sounds old and familiar, leaving the audience waiting for the extraordinary sensation that never comes”
With that in mind, Russolo devised noise-making machines that he called “intonarumori” from which he drew a clamor of sounds that was music to his ears only. Others may have liken it to the hideous bellows emitting from Perillos of Athens barbaric Brazen Bull. There's no accounting for other people's taste and in all likelihood, Luigi probably had no fucks left to give. A performance of his Gran Concerto Futuristico (1917) had met with strong disapproval and violence from the audience, as Russolo himself had predicted. 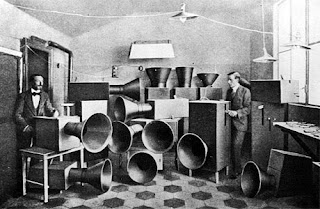 "Ancient life was all silence"

Once upon a time... the only sounds heard on earth were natural occurring. Thunderstorms, the howl of the wind, wild animals etc. That came to an end the day a hypothetical Cro-Magnon, whom I'll call Gronk, picked up a stick and struck a hollow log. This impromptu improvisation was followed by a chorus of “ugh, ugh, ugh... me like, me like” with the exception of that one introspective fellow who shook his head and muttered to himself “Gronk flat”
Growlers, Cracklers and Bursters in the spirit of Luigi Russolo. Who never met a sound that he didn't like. Paul Hegarty forewarns us that “Noise music is music of anticipation, not least because today's noise will be the music of tomorrow.“ I guess now would be the time to go out and corner the amplified suitcase market. ~ Dirt City Chronicles ~ 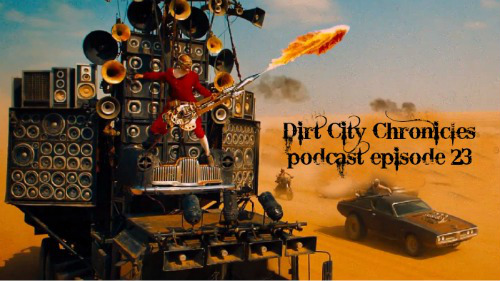 Heartbroken boppers have seen better days, but for music curators such as myself.... times have never been better. New Mexico based musicians and bands are tagged under New Mexico with sub tags such as Albuquerque, Santa Fe and Las Cruces. If you're into local music, then Bandcamp's search by location is a godsend. CD Baby employs the handy feature and I recall a time when MySpace Music and Soundclick did the same.
Albuquerque is well represented as are Santa Fe and Las Cruces. Though be advised, the Santa Fe N.M. search segues into music acts from Santa Fe, the capital of Santa Fe province in Argentina. Which is cool if you're into lukewarm latino pop and smarmy tango music. Likewise for Las Cruces where the results transition to those for Las Cruces, a Chicano doom metal band from San Antonio, Tx.


“You'll never hear surf music again”
Slackeye Slim (Joe Frankland) a musician from Wooster, Ohio with stops in Colorado, Montana and Wisconsin along the way. Now relocated to Tijeras N.M. he's described as “a musician from the desert usually, but sometimes he lives in the woods in a gigantic bird's nest” Slim takes the whole “gothic country” thing a step further.... “cubist country” perhaps.

Frankland paints with a broad brush, recreating a wild west that is strictly a product of his own vivid imagination. Zombies, gunslingers and other nefarious western characters come to life through Slim's stylized drawl and sparse instrumentation. Cliches and conventions be damned, Frankland gets away with being goofy as hell... because cynicism made audible is a taste that we never get tired of.

Finding one's self a thousand miles from the nearest beach (Tingley not withstanding) doesn't necessarily impede a love of surf music. New Mexico's affinity for the genre can be traced back to The Fireballs (pre-Jimmy Gilmer) and God only knows how many New Mexicans were lured to the Golden State by the prospect of bitchin' waves and beach bunnies.

Self proclaimed purveyors of “high desert surf noir” Phantom Lake consists of Bud Melvin, Jessica Billey, Clifford Grindstaff and Roger Apodaca. All talented veterans of 'Burque's music scene. I hear they're no longer active, which is a cryin' shame, for they do that voodoo, that they do... so well. The Surf Lords revolve around Tom Chism's pipeline licks.... they're more authentic than Kahuna's beach shack, so believable that you'll be scanning the radio dial for surf reports 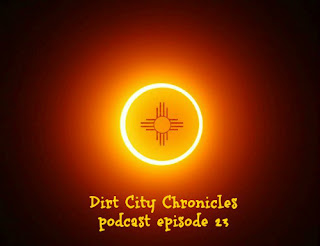 Tina Delgado is alive, Generalissimo Francisco Franco is still dead and this dispatch is good to go. Number one in a field of one, Dirt City Chronicles.

What Are You Listening To?

Give me your lies, innuendo, insinuations and hearsay. Your rumors, gossip and scuttlebutt. Your unsubstantiated tittle-tattle from unreliable sources and I shall shape them into something worth reading. This ain't journalism, this is rock and roll.
"Please bear in mind that the internet is a vast nest of misinformation which allows anyone to say anything" 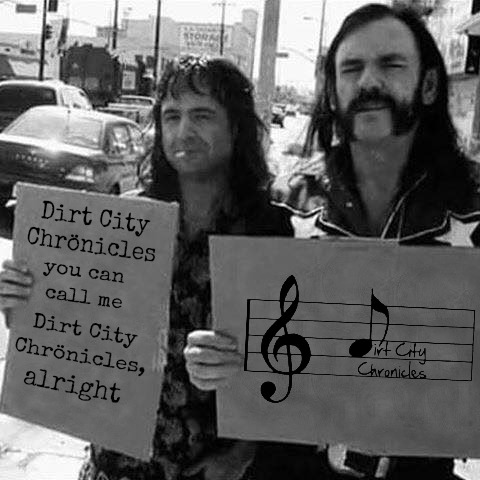 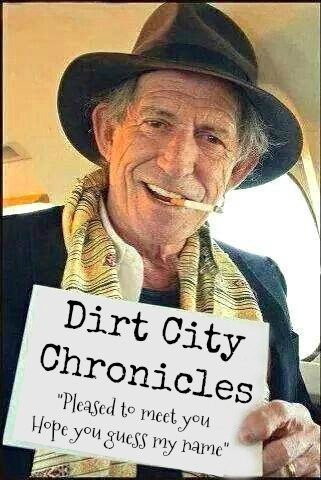 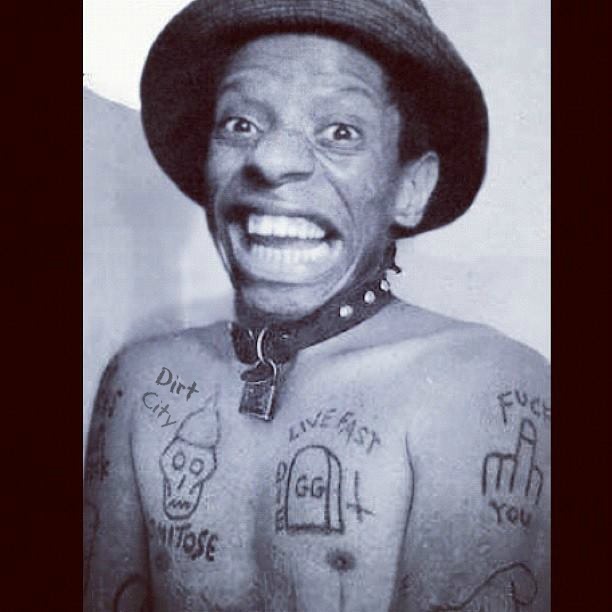 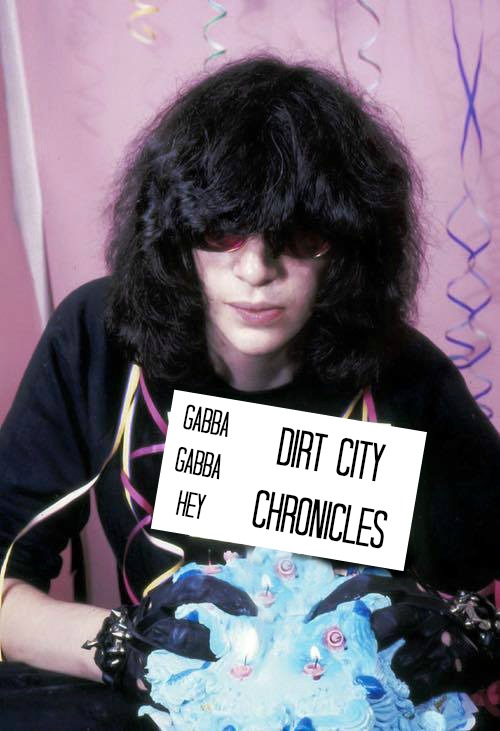